It is the universal custom to display the flag only from sunrise to sunset on buildings and on stationary flagstaffs in the open. However, when a patriotic effect is desired, the flag may be displayed twenty-four hours a day if properly illuminated during the hours of darkness.

When used on a speaker’s platform, the flag, if displayed flat, should be displayed above and behind the speaker. When displayed from a staff in a church or public auditorium, the flag of the United States of America should hold the position of superior prominence, in advance of the audience, and in the position of honor at the clergyman or speaker’s right as he faces the audience. Any other flag should be placed on the left of the clergyman or speaker or the right of the audience.

The flag, when flown at half-staff, should be first hoisted to the peak for an instant and then lowered to the half-staff position. The flag should be again raised to the peak before it is lowered for the day. On Memorial Day, the flag should be displayed at half-staff until noon only, then raised to the top of the staff. By order of the President, the flag shall be flown at half-staff upon the death of principal figures of the United States Government and the Governor of the State, territory or possession, as a mark of respect to their memory. In the event of a death of other officials or foreign dignitaries, the flag is to be displayed at half-staff according to Presidential instructions or orders, or in accordance with recognized customs or practices not inconsistent with the law. 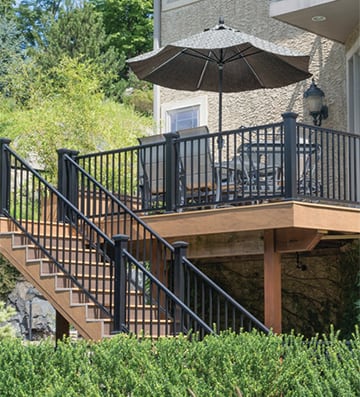 Railing Our railings add style & polish to your porch or stairs. Flags & Flagpoles Flagpoles along with US, state, or specialty flags made right here in the USA. Material Only We supply materials for DIY homeowners & contractors.

Beautify, secure & enhance
your outdoor space. Whether you need a fence, railings, flags, or flagpoles, we at American Fence & Flag
are dedicated to your complete satisfaction.
Family Owned & Operated
Since 1983
High Quality Products
& Craftsmanship
Commitment to Our
Mission
24‐Hour Display
Yard
Earning our stripes,
one customer at a time.
The install was quick and we highly recommend them! — Donna R.
Proudly Serving the Lehigh Valley Since 1983 Showroom & Display Yard 2738 Eberhart Road
Whitehall, PA 18052
Directions